Beyoncé has curated a new album featuring international artists called The Lion King: The Gift. It’s out July 19. The album, as well as the film’s soundtrack, will feature a new Beyoncé song called “Spirit.” Listen to the new song below.

In addition to The Gift, Walt Disney Records will release the original soundtrack for the new live-action remake of The Lion King on July 11. It features “Can You Feel the Love Tonight” with Beyoncé and Donald Glover.

“This is sonic cinema,” said Beyoncé of the new album in a statement. “This is a new experience of storytelling. I wanted to do more than find a collection of songs that were inspired by the film. It is a mixture of genres and collaboration that isn’t one sound. It is influenced by everything from R&B, pop, hip hop and Afro Beat.”

“I wanted to put everyone on their own journey to link the storyline,” she continued. “Each song was written to reflect the film’s storytelling that gives the listener a chance to imagine their own imagery, while listening to a new contemporary interpretation. It was important that the music was not only performed by the most interesting and talented artists but also produced by the best African producers. Authenticity and heart were important to me.”

In a recent interview with Fandango, director Jon Favreau said that Beyoncé “performed and wrote [‘Spirit’] in the spirit of the production.” He added that Beyoncé made the song with Lebo M. and Hans Zimmer. “They were all collaborating with her and helping to bring this new piece of music into a film where there’s already a very established musical personality to the piece. So it was nice of them to have them working with her to allow the new song to feel organically a part of the new production.”

Beyoncé voices Nala in the new The Lion King. The cast also includes Donald Glover (as Simba), John Oliver (as Zazu), Eric André (as Azizi, one of the hyenas), Seth Rogen (as Pumbaa), and more. The film hits U.S. theaters on July 19. 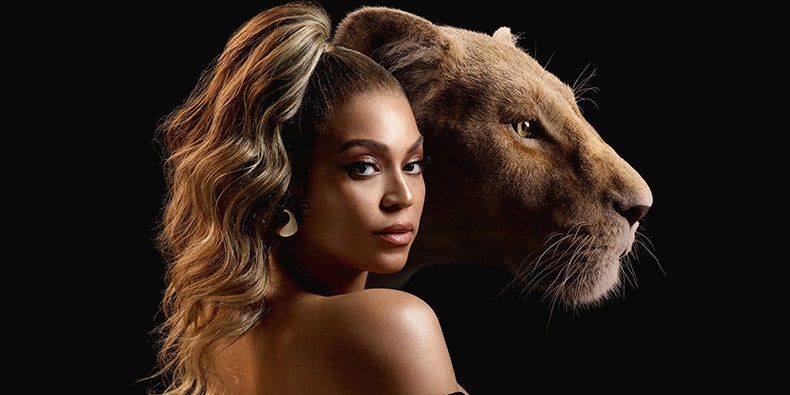